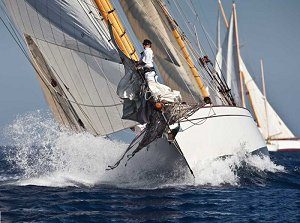 The principality’s interest in sailing regattas has a long history. Indeed, back in 1886, the “Regatta Committee” was created, which, with the assistance of the Society of Sea Baths, organized during the social season races on yachts belonging to various owners of the Mediterranean coast or the Italian Riviera.

Then, in 1888, a group of 12 Monaco decided to form a sports society, the aim of which was to develop such water disciplines as sailing and rowing. Thus, with the great support of Prince Albert I, the Society of Regattas of Monaco was released.

However, the Yacht Club as such was created only in 1953 at the initiative of Prince Rainier III. Later, the Regatta Society will give the sailing section to its competence, but will retain rowing as a water discipline.

Since 1985, Prince Albert was appointed father to the post of President of the Yacht Club. A yacht club that does not have serious technical equipment (a pontoon bridge, a crane, a sailing school …) in addition to participating in water competitions has the main purpose of organizing sports events in the principality.

Among the most famous competitions, it should be noted such as “Off-shore” (the first was held in 1983), the Monaco-New York race (the first start, which was given in 1985), the Crown Prince Albert Cup, as well as the International Yachting competition club.

In 1994, the Monaco Yacht Club organized a grand meeting of old sailing and motorized vessels to participate in the Monaco Classic Wick competition in order to celebrate the 10th anniversary of being the President of the Prince Albert Club and the 90th anniversary of the first motor boat competition, which took place in the principality in 1904, marking a new era of the extraordinary development of motor technology in all areas.