Adam and Eve with a cast iron core (part 1) 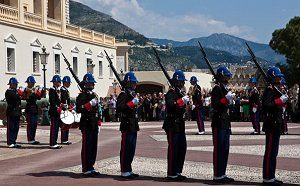 Breakfast in the morning at the hotel. I suffered a lot. For five euros I was fed a croissant, microporosion of jam with butter and coffee. And it’s all! Let’s go look for a place to eat. We found a wonderful Multery cafe on Avenue Jean Medicin. Pastries, different salads, great coffee. Coffee seems to be a traditional French drink. There are many of him and he is of good quality. But there are big problems with tea. Even in an expensive restaurant you will be offered a bag of Lipton … horror. I hate tampon tea!

Monaco is conveniently accessible by train. At the station, we deal with a vending machine that sells tickets for a long time.I like to tinker with the technique: the machine is controlled by a large round knob, similar to the volume knob – you turn it and move through the menu items, and then press the same knob. It takes about 15 minutes to get to Monaco, a ticket costs about 4 euros (this is full, there are a lot of preferential ones – for example, for people under 25, for children, etc.). The train looks a little like our train: smaller cars and more comfortable seats. Inside the carriage is overloaded with graffiti, Arab youth stretches their legs on chairs. But pretty clean. A lot of tourists. It is surprising that smoking is allowed on the train, which many people use. While wandering the streets of the city, smokers somehow don’t notice, it seems that there are fewer of them than in Moscow. And in the car there is unexpectedly a lot.

The Cote d’Azur is densely populated, so no “wildlife” is observed along the way. Only tunnels and houses. Platform Monaksky station – type of metro station. The ceiling is dotted with light bulbs, like a starry sky, just a sight for sore eyes! At the station, traditionally, there is a tourist information center. The exit from the station is damn beautiful, as if you exit the cave into a mountain gorge that descends to the sea. Forward!

In Monaco, it seems that houses are shrinking harder to the sea – I still do not understand why, either the buildings are higher (the land is expensive), or the foothills are closer than in Nice. High-rise buildings are Monaco’s calling card. Traveling along the Riviera, I have never seen such a development anywhere else. It is understandable, housing prices are fantastic here. Realtors all along the coast hang out their offers in shop windows. Very informative: studio – 800 thousand euros, one-room apartment 1-1.5 million euros, two-room apartment 2 million and above. Such are the hostels for multimillionaires. I thought it was funnier for millionaires to live in a huge villa or a spacious ranch. But no, they are in a hurry to settle in a cramped apartment, under the protectorate of the Prince. And they are hardly bought for the delights of offshore taxation. Most likely, they, millionaires, want to live among their own kind. So indecent money is paid for housing, and Bulgakov, I remember, wrote that it was the Muscovites who spoiled the housing issue.

The city-state is all so clean and tidy. There are no surprises from the local dogs on the sidewalks. Many flowers, even on the pillars hang flower pots. Handsomely. Monaco left a very strange impression. A city-museum of some sort – everything is unusually neat and sleek. In the gardens and parks on each plant – a sign. Many monuments and memorial plaques to the national hero of Monaco, Prince Albert I. He created museums, and laid ships, and … well, almost planted every tree with his own hands, built every house, and raised all the inhabitants of Monaco. Big man.

Near the Princely Palace we observe the ceremonial change of the Karauliner Guard. Oh, beautiful! The palace was circled and went to the embankment. The port of Monaco is visible from everywhere, but getting to it is not easy. The streets are winding, fences from the net-chain-link around, the feeling is like being in a zoo. Only who in the cells – you, or the locals? It’s not clear … The fences are fenced for two reasons. The first is to protect people from getting on the Formula 1 track. As you know, the race takes place right through the streets of the city. The second – so that stupid tourists do not wander around where you can not – all around because the private possessions of very wealthy people!

Well, we broke through to the port – stomp along the promenade. Damn nice to view yachts. I can’t convey my emotions – these are all non-verbal sensations. So I just want to stand, watch and drool.

We are wondering the route to the Casino. Right now along the embankment, then there should probably be a rise … hmm … a dead end. Some kind of corridor, a crowd of tourists moving slowly. Yeah, there are lifts ahead – with the promenade straight to the casino! Only one elevator broke, and there are too many tourists. The queue moves slowly, in front of the umbrellas of tour guides. From nothing to do, we study the map of the area.

The elevator takes you to the terrace of the casino, which is also the roof of the luxurious Monte Carlo Grand Hotel.