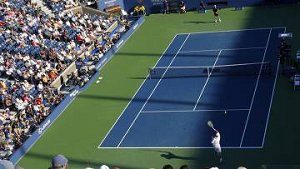 In 1905, the Sea Bath Society decided to build an additional building for the Hotel de Paris, and thus the tennis courts were forced to “move”. The success of the club forces OMV to start developing new courts in the La Condamine quarter, but the project to host the Monte Carlo Tennis Club in this central and highly visited area of ​​the Principality could not be final.

Faced with difficulties in finding an extensive site in the Principality of Monaco, the organizers “agreed” to build courts … on the roof of one of the largest garages in Beausoleil. Thus, on January 28, 1921, the grand opening of the AvtoRiviera club took place. Tourism begins to develop, the summer season is becoming fashionable. Thanks to writers and artists, a significant influx of tourists is observed in Antibes, Cannes, Saint-Jean-Can-Ferrat.

Monte Carlo was forced to adapt to new conditions, and in this regard, 100 million francs were spent on the construction of new summer venues and tennis courts. February 27, 1928 a whole galaxy of crowned persons (Gustave V – a great tennis lover, the Greek prince Nicolas, the Grand Duchess Helene and the Grand Russian Prince Andrew) attended the grand opening of the Monte Carlo Country Club.

Located on the territory of Roquebrune-Cap-Mar-Ten, between the sea and the mountains, according to the project of architect Letron, twenty-three tennis courts and a squash hall were built. Due to its exceptional location and high quality of services, as well as the presence of the most eminent tennis players of the world at the annual traditional tennis tournament, the Monte Carlo Tennis Club has established itself as one of the main “temples” of modern tennis.

With a total area of ​​33,426 m2, there are currently 21 tennis courts with earthen cover, including two indoor courts and two with synthetic cover, a general fitness room, a swimming pool, two squash halls, a training ground for playing golf, bar-restaurant. This tennis club is open throughout the year and offers its participants, which number more than 1,400 people, to take advantage of the best quality of service, regardless of weather conditions, although the local landscape, more like a postcard, is characterized by warm rays of the Mediterranean sun.

Annually, in April, one of the main events of the World Tennis Championships is organized – the Open de Monte Carlo, which brings together the best tennis players in the world classification (ATP). Along with this tournament, numerous meetings are inscribed on the calendar of the Monte Carlo Country Club. In June – the International Veterans Tournament, in July – the Pro-Celebrity Tournament (ATP Masters); in August – the International Summer Tournament (open to club members); in October – Lacoste Tournament.