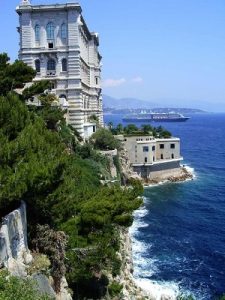 Monegasques (as the locals call themselves) manage from time to time to solve their “housing problem” without declaring war on neighboring France. Land is taken from the sea, filling new areas with earth. Thus, the area of ​​Fontvieille with an area of ​​220,000 square meters appeared. meters. Is it worth mentioning that a meter of land in Monaco costs crazy money?

All can be kings. The ancient family of Grimaldi ruled the principality from the fourteenth century: it turns out that this is the oldest ruling dynasty in Europe. If other European monarchs have long lost their leadership status and exist mainly “for prestige”, then the Prince of Monaco still solves all the political and economic issues of the country. The former ruler, Prince Rainier III, during the years of his power (1949 – 2005) turned Monaco into a thriving enterprise. It is no coincidence that in Europe Monaco is called the “reserve for the rich.” Now, Formula 1 races are taking place here, which bring millions of dollars to the treasury, and wealthy heirs make fortunes in the local casinos. Monaco receives considerable income from the banking business, expensive hotels and restaurants.

The rich cry too. News from the eventful life of the representatives of the glorious Grimaldi family has not left the covers of glossy magazines for fifty years. Their fate (admittedly very difficult) is monitored by the whole planet. In 1956, Prince Rainier III committed an act unthinkable for his status: he married the Hollywood actress Grace Kelly. A love marriage was happy, and three children were born: Carolina, Stefania and heir to the throne, Albert. But things do not go smoothly in the life of the rich and famous either: in 1982, the beautiful Grace tragically died in a car accident, the husband of her eldest daughter, Carolina, was killed under strange circumstances. Princess Stefania, the youngest daughter, for a long time surprised the audience with eccentric antics, even for a wealthy heiress. Prince Albert, who ascended the throne last year for more than a decade, remains the most enviable European bachelor, and so far there is no official heir in the Principality of Monaco.

Money down the drain. Monte Carlo is not a city, but the name of one of the districts of Monaco, where actually the world-famous casino is located. It opened in 1860 thanks to the efforts of Charles III, who thus decided to improve the financial affairs of the principality entrusted to him. The casino building is a great mix of styles. There are bel-epoque, baroque, and decadence. Now at his entrance at any time of the day or night dozens of the most expensive cars are parked – Jaguars, Porsche, Bentley. The windows of neighboring stores sparkle for 20 thousand hours and diamonds the size of a chicken egg. If you don’t have enough money for diamonds, you can buy rhinestone-sneakers with gold laces for just 600.