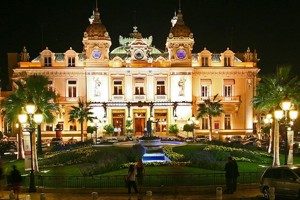 However, Mireillea is married, and if that gentleman ever finds his Monegasque, he himself will not become a happy taxpayer anyway. Only his children will be recognized as full citizens of the principality.
The queue in Monegasques is long. And life is short. Although among my contemporaries-Russians there are at least residents, it means that there is a chance. They say that Prince Rainier is not too generous in the distribution of residence permits, and not only in relation to Eastern Europe. Just those who want to fit in these two and a half kilometers more than necessary. And they say that at an interview when obtaining a permit to live in Monaco, it is better to say this: I want to live in your country, because the climate here is very beautiful, safe and wonderful. It seems to be true, and it is believed.

Casino in Monte Carlo, a night club in Sochi

Somerset Maugham called the principality “a place under the sun for those who are always in the shade.” This state is a closed private club. Here, celebrities take a break from the paparazzi: even the maids in hotels carefully watch their guests incognito, not to mention the casino manager.

Yes, the manager says, crazy money is losing and winning here. Especially in the Winston Churchill VIP room with leather walls – this is for those who play for large sums. Amount Order? Will not say. He will only say that the minimum bet is 50 francs and that the casino gives 60% of the profit to the principality. At the same time, Monegasques and simply residents of Monaco are forbidden to play – Grimaldi cares about the family budget of their citizens.

The Grand Casino in Monte Carlo The managing casino ended the tour in some frighteningly insinuating manner:

– Five steps for a chance instead of the usual four, these are very favorable conditions …

I have no idea that this means, apparently, something very good. An Italian woman with a big bag of chips and her face in a state of nervous spasm passed loudly to the checkout counter. Whispered around. The machine for counting money began to count francs – it seems that it lasted forever.

I called Panyushkin to the famous night club Jimmy`z. It turned out that the famous Jimmy`z is one disorder. Fraudulent men of the age of a gentleman from San Francisco with uniform companions (tall, tanned, large breasts). If it weren’t for tailcoats (very expensive!), I would have decided that I ended up in Sochi: isn’t it embarrassing? They put Madonna’s CD and consider it a disco? It would be better to have included a gramophone with notes by Edith Piaf.

They drank a lot from boredom. It was argued that Moscow in the club sense is just the center of the world. But about the fact that in open shoes and with diamonds down the street, this is not possible in Moscow. Or, say, London – there, too, a beautiful life is not very noticeable, the center is inhabited by immigrants and the corresponding dangers. In Paris or Milan – crowds of tourists with purchases, this is also a style that is far from glamor. And nice Nice now reminds in some places a large village. So if there is still a place left in the world where “com il fo” and “belle epoque” are everywhere observed, it is Monaco.

The princedom does not have an art gallery as such, but ancient paintings can be found in the Musee de la Chapelle de la Visitation, which houses the collection of Barbara Piacheski Johnson (Zurbaran and Rubens are good), as well as in the Prince’s Palace (although it is open only in the summer season) . In addition, first-class exhibitions are constantly held here. In Monaco, it makes sense to visit the museum of mechanical dolls, perhaps the best in Europe, and located in the villa by Charles Garnier. And in the Fontvieille quarter, a lot of collections have been collected – from the animal world (the zoo is, however, small), to postage stamps, where the rarest samples from around the world are regularly shown. In addition, His Highness put on display his collection of vintage cars, including the famous “bugatti” and the rare “Renault Torpedo” of 1911, not to mention the 1903 De Dion Bouton. And around the corner is the Maritime Museum, with its countless models of ships, ancient and modern. Children are dying. They will also be interested in a wax museum dedicated to the history of the principality. And a very strong impression is made by Jardin Exotique – an exotic garden climbing on the ledges of a cliff overhanging the principality and the sea. There are thousands of unexpectedly cute cacti and vibrant colors. Visits to the deep caves of the amazing grotto of the Observatory take place once an hour. Waiting can be brightened up in a small but impressive Museum of Prehistoric Anthropology.