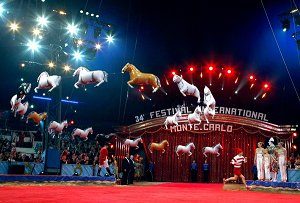 The XXXIII International Circus Festival in Monte Carlo brought together the best artists from around the world under the dome of the famous tent of Fontvieille. Among them were our compatriots. For the first time in this millennium and for the second time in the history of the country, Ukraine received a gold award at the Monte Carlo festival. On January 18, 2009, she was awarded the Kobzov circus performers, air gymnasts Dmitry Grigorov and Oles Shulge for the flight of passion. “Princess Stephanie is standing over there!” Natasha Rybchenko, artist of the National Circus of Ukraine, winner of last year’s festival in Monte Carlo, pushed me by the arm. “You just don’t need to take pictures,” she predicted my attempt to raise the camera, “she doesn’t like that.” END_OF_DOCUMENT_TOKEN_TO_BE_REPLACED