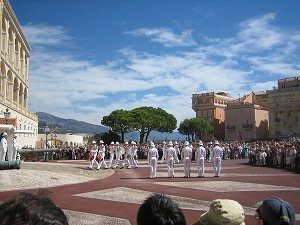 In 1960, the sovereign prince provided the opportunity to the prestigious National Opera Orchestra (which has been called the Monte Carlo Philharmonic Orchestra since 1980), which has earned international recognition, to organize concerts on the territory of the Honorary Courtyard.

Since then, it has already become a tradition that in summer the Honorary Courtyard becomes an open-air stage for classical concerts of the highest level, where great soloists and orchestra conductors perform.

Palace Square – the square in front of the Palace, surrounded by a battery of cannons cast in the era of Louis XIV. Every day at 11.55 there is a change of the guard of the Palace, which is carried out by the Prince’s guards in full full dress. The ritual of changing the guard has not changed for centuries. In the personal guard of the prince, only Monkeysqui serve, unlike other posts of the principality.