The best museum of Monaco (part 1) 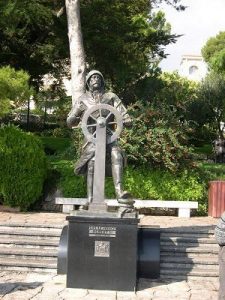 The French Riviera, Monaco, Monte Carlo … Imagination immediately draws a kind of distant, inaccessible world of sun, celebration, passion and excitement, interspersed with yachts, “Rolls-Royces” and champagne fountains. Slender palm trees and tanned ladies on the golden edge of the azure sea, caressing the soles of white-stone villas and medieval castles. The ultramodern masses that are leaving in tiers up the steep slopes of the natural amphitheater are cut here and there by straight ones like an arrow, autobahns or twisted asphalt serpentines … So, Monaco. Two recent events, which cannot be called ordinary, are connected with this place: firstly, the tiny state, which can be crossed on foot in just an hour, marked the 700th anniversary of the ruling Grimaldi dynasty, and secondly, sadly enough , the life of captain Jacques-Yves-Cousteau, a great explorer of the deep sea, who for a long time headed the local Museum of Oceanography, one of the honorary citizens of Monaco, broke off …

… The building of the Oceanographic Museum, which grew directly from the cliff, being, in itself, an architectural masterpiece, swiftly rose above the sea, over the tiny patch of pebble beach, over the evergreen terrace park, or “marinarium”, over the castle, streets and squares flying to it . From the upper observation deck you can see not only the whole principality, but also the winding perspective stretching for many kilometers of the French and even Italian Cote d’Azur. And if you look ahead – then the look is lost in the endless blue, sometimes torn up by ripples, and only sometimes clings to white spots of slowly crawling boats or swiftly flying gulls.

The Oceanographic Museum arose one hundred years ago, in 1899. The modern building was built in 1910 by the architect Delefortry.

The museum is based on the collections collected by the “learned prince” Albert I, a passionate explorer of the seas and oceans, during scientific expeditions on his yachts at the turn of the past and present centuries.

Albert Charles Opore Grimaldi was an outstanding person and combined at the same time the philanthropist of science and the tireless natural scientist. He generously spent the considerable revenues that Monte Carlo casino earned on sea expeditions and cooperation with prominent figures in science and culture.

Being a navigator and having spent the first half of his life serving in the Spanish Navy, he was imbued with boundless love for the sea, which predetermined his life in the future – after in 1889 he inherited the throne of his father in the ancient castle of Monaco. Having built the Yrondel yacht, Albert I invited ocean scientists to board and went to explore the depths of the ocean.

This business enthralled him so much that the wealthy prince did not stop at the construction of a fleet of large steam yachts for oceanographic work: Princess Alice, Princess Alice II, Irondale II, which deserve to be on a par with such famous research ships like the English Challenger, the Norwegian Fram, our Vityaz.

The prince’s overgrown marine collections required a special room, and he, choosing a very beautiful and romantic place on a high rocky cliff, decided to build a new museum, with laboratories, a library and classrooms. This is how the “Temple of the Sea” came about – the current Oceanographic Museum of Monaco.

The Museum is the main scientific base of the International Institute of Oceanography, whose headquarters are located in Paris and which was again established by Prince Albert. And this is understandable – the exhibits in it are of exceptional scientific value on a global scale.

Prince Albert’s contribution to oceanography was very significant: 3,698 studies of the sea, a comprehensive study of vertical migrations of pelagic animals, analysis of deep-sea fauna, study of the depths of the sea, installation of 2,000 buoys in the Atlantic Ocean to measure currents, and much more.

Among the exotic animals that the Monarch himself caught for the collection of his Museum, it is necessary to highlight the famous giant octopus from the Azores, a mythological exhibit about which the legends of the sea were composed.

In the halls of the Museum are stored navigational instruments and zoological collections collected by the Prince and his associates. A huge library, where, among other things, reports on oceanographic expeditions are stored, is at the disposal of researchers.